I was unable to find a list of Canon’s Nano USM lenses, so I thought I would create one. Nano USM (ultrasonic motor) is Canon’s latest generation of lens motors, combining the speed of USM motors with the silent action of their STM motors. If you’ve heard news of a new Nano USM lens and I haven’t listed it, please let me know below.

Lenses which have the Nano USM

See further below for a Nano USM vs STM video comparison and some history on Nano USM lenses. The Canon 18-135mm IS USM was released in March, 2016, as the improved version of the previous Canon 18-135mm IS STM lens. Generally regarded as an upgrade to the normal 18-55mm IS STM kit lens, the 18-135mm IS USM features the new Nano USM as well as the ability to be used with the Canon PZ-E1 zoom adapter. This lens has received generally positive feedback for being an “all-rounder”, especially for those looking to get into DSLR video-making. Note that this lens has an EF-S mount, meaning it will work on Canon APS-C cameras, but not full frame ones. 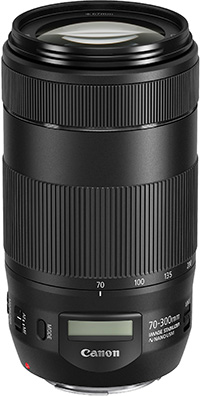 The Canon 70-300mm ISM II USM was released in September, 2016, replacing the previous version, the 70-300mm f/4-5.6 IS USM lens. Unlike most other lenses, the Nano USM version of the 70-300mm has an LCD screen, which provides the user various information about the shooting environment. Such factors include:

as well as having the ability to reverse its black and white display pixels depending on the user’s preference. Note that this lens has an EF mount, meaning it will work on both APS-C and full frame cameras by Canon. Announced in September 2018, the new RF 24-105mm will feature the Nano USM autofocus motor. The lens is designed with videographers in mind, with a constant f/4 aperture that can be controlled in 1/8th EV steps, image stabilisation and minimal focus breathing. Designed to be more of an “all-in-one”, “superzoom” lens, or something that will come in a kit, the RF 24-240mm f4-6.3 IS USM represents more of an affordable option in the current RF lens line-up. With image stabilisation and de-clicked aperture blades, the RF 24-240 appears to be aimed at video-makers.

Canon produced a quick video which demonstrates how fast the Nano USM auto-focus speed is versus the STM motor in the 18-135mm lens.

It would be interesting to see the difference in other Nano USM lenses.

Nano USM was developed as a challenge for Canon to combine the auto-focus speed of its USM motors with the quiet action of its STM motors. The motor itself is surprisingly small, and works using vibration along the length of the lens to extend or contract the focusing elements. The official video below shows more about how this works:

Only certain Canon cameras work with Nano USM lenses for its intended smooth video performance. These cameras include those with Canon’s Hybrid AF or Dual-Pixel AF systems.

For more information about Canon’s Nano USM lenses, check out the following links:

This site uses Akismet to reduce spam. Learn how your comment data is processed.

By reading this blog you agree to the terms set out in the Disclaimer.